Wow its only been 2 weeks! 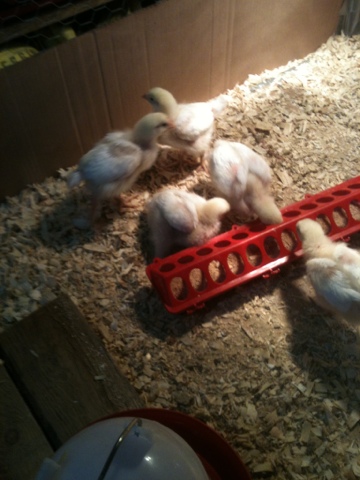 I read several articles on how to raise these stupid birds. Now 2 weeks later 2 of them have leg problems. They can't even stand. Apparently it’s because their bodies are growing faster than their bones. I guess I fed them too much. I have cut back on their food. This morning it looks like I might have a third bird with leg problems too. My husband and I decided that we won't ever raise these stupid birds again. We will get some fertile barred rock eggs and incubate them ourselves. Barred Rocks are a good sturdy meat and egg bird. We will raise about a dozen and cull the flock for meat chickens as needed just like in the old days. When we want a chicken for dinner we'll got out to the yard and get a fresh one. I will update on the progress of the cornish cross birds. After reading a few more articles on what to do with birds with bad legs, we will process them early if they have any further problems getting around, so far they are can waddle over to the food and water.
Posted by Unknown at 3:17 AM

How are you doing with your Cornish Crosses now? I am curious as to which hatchery you ordered from as well...