You will notice in the first picture of my ducks they were on shavings. WRONG! After a couple of days I finally decided to check online how to raise ducks.  It’s kind of the cart before the horse. I found out that you should use towels, blankets, or straw. They can eat the shavings, which can cause them to choke or become obstructed.  I chose towels, since I have a bunch of old beach towels.  I also thought it might be more earth friendly, and cheaper to repurpose than it was to buy straw.  I cut the towels in thirds, and surged the edges.  Each morning I remove the soiled towels, place them in a bucket, and hose them off in the yard.  I am hoping for greener grass.  I have enough towels for a couple days.  Every other day I wash the soiled towels with a bit of bleach. 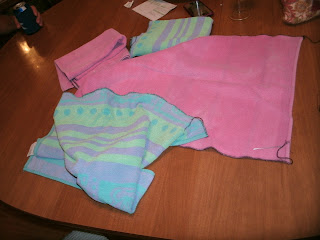 During my reading, I also found out that the cage wire can be painful on their feet.  I remembered that I had an old shower curtain, and that the plastic would be heavy enough not to be a hazard to my ducks.  I cut 2 squares to fit into the cage bottom.   This gives me one replacement, which I change out when the first gets soiled enough that I can’t just wipe it down.  I cut a hole in the plastic under the waterer, so the excess water drains into a bucket below.  They really like playing in the water. They also need it to help swallow their food.
Then after a week I purchased a feeder that hangs on the side of the cage. It holds more than the lids that I was using, and isn't as messy. 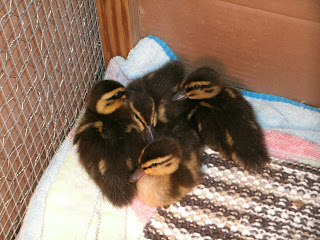 I also read that they like grass. After mowing the lawn I gave them some grass clippings. They really loved the grass clippings.  I also mashed up a hardboiled egg with the shell on as I also discovered in my reading.  They like them both.  The grass clipping see to be a bit of a problem.  I can’t seem to get them all out of the towels.  I am guessing I will have grass in my washer and dryer for a bit.  I am thinking perhaps if I wash jeans after the duck towels perhaps some of the grass with come out with the jeans.  I won't want grass in my shirts or underwear.  J
Cornish Cross Chickens
Just wanted to add that they get food during the day and are taken off at night for 12 hours.  Otherwise they will eat too much and their bodies will grow faster than their bones.
Posted by Unknown at 9:45 AM