We processed the 6 cornish cross chickens on Saturday.  It took about 3 hours.  We also processed Crockpot the rooster.  He's a year old.  His skin was tough.  I may have to cook him 24 hours to be able to eat him. 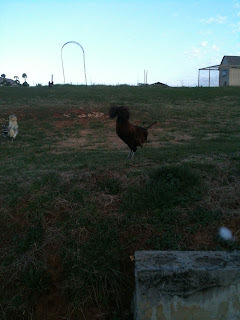 The Cornish Cross Chickens at 8 weeks.  No official weight, but I would say close to 10 pounds.  Glad we got them done because its been raining ever since and there would have been no way we could have gotten them dry.  It rained all day yesterday, today, and its suppose to rain most of tomorrow.  We would have probably had to put a tarp over the cage shown below as well as added some shavings and straw to get them dry.  Thank goodness they are in the freezer instead!  :-) 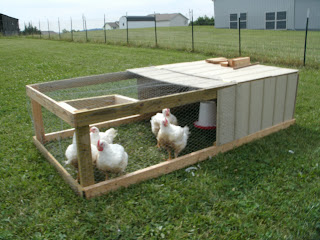 First they are placed in the restraining cone, so they will drain properly.  We tape the legs together.  If you have trees you could tie their feet and hang them in a tree.  With a sharp knive, cut the juggler vein on each side of the neck. 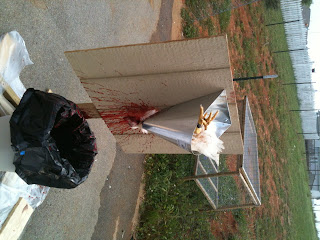 Missing a picture of the large canner pot on the camp stove heated to 150 degrees.  The chicken is scalded for 50 seconds or until the feather pull out easily.  Then pluck.  We set the chickens on the end of the table next to the garbage can to pluck them.

Chill after they are plucked, then cut off the head and loosen the throat and crop so you can pull it down through the carcass.  Pinch and cut a hole in the body cavity above the rectom.  Gently loose the insides, pull out and then cut around the rectum.  Cut the gland off that is on top of the tail. 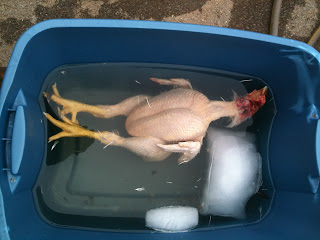 This is what you end up with.﻿ 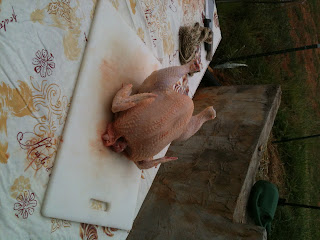 Its bigger than my large stock pot! 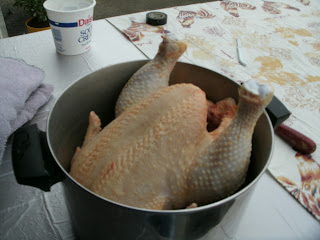 We chilled them in an ice chest overnight covered with ice, and blocks of ice that we previously froze.  The next day we put them in the freezer.  It took several hours for them to fully freeze.  For these 7 chickens we had about 4 - 6 ice blocks.  I froze water in a large plastic container and emptied into a grocery bag.  This took a week or so.  You must plan ahead.  We also had several quart sized milk jugs with ice frozen in them.  I also saved the ice out of my inside frige ice maker several times.  Ziploc has 2 gallon size bags, which is what I used to freeze these giant birds.